All over the United States, millennials are investing their time and resources in working to better America. We are at the center of policy change, innovation and entrepreneurship. The 35U recognizes our contributions as leaders and was created in 2015 to provide resources that inspire and aide the next generation of leaders across the United States.

Our mission is to engage and motivate the next generation of leaders in government, business, media, healthcare and education by providing resources tailored to this essential audience. 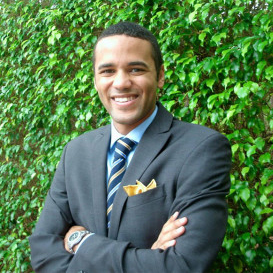 Eric Gooden is a proud resident of Boca Raton, Florida and Michigan native. In 2014, Gooden graduated from Lynn University with a Bachelors of Science in Criminal Justice. While at Lynn University, Gooden served three years in the student government, where he honed his love of politics and public service. He also holds a technical certificate in Broadcasting from Specs Howard School of Media Arts.

An active community volunteer, Eric began his civic outreach while still in college, coaching basketball at Boca Raton’s prestigious St. Andrews School. Additionally he has held several board posts within the City of Boca Raton, serving on the Disability Advisory Board and the Education Advisory Board, before his recent appointment to the Community Advisory Panel. In 2016, Eric was elected by his colleagues to serve as Chairman of the Community Advisory Panel. Gooden was reelected in May of 2018. Other community volunteer efforts include Boca Raton Helping Hands, YMCA, St. Lawrence Chapel Homeless Shelter, Boating Beach Bash for People with Disabilities, and Boys and Girls Club.

In 2014, he was selected by Congressman Alcee Hastings (FL-20) to participate in Congressional Black Caucus Institute’s Leadership/Political Boot Camp which is designed to generate a pool of minority professionals who are well-qualified with regard to public and private sector policy issues and the conduct of political campaigns. On the heels of this experience, Gooden created The 35 U. 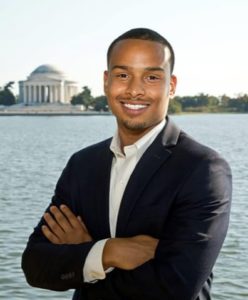 Originally from Charleston, SC, Dawson currently resides in Philadelphia, PA where he studies at the Villanova University School of Law. In 2015, Dawson graduated from American University in Washington, D.C. with an interdisciplinary degree in Communications, Legal Studies, Economics, and Government Policy. While in college, Dawson extensively participated in student government and extracurricular activities. It was here where he realized the power of bringing the best minds together for the greater good. In 2013, Dawson was a legislative intern for Congressman Ben R. Lujan.

In 2015, Dawson served as a White House intern under President Barack Obama. Juan continues to actively make a difference in his community. In 2019, he was selected as a fellow at the Chicago Bar Foundation where he provided legal information, procedural guidance, and resource referrals to pro-se litigants in Chicago, IL.

Currently, Juan is seeking ways to improve access to voting in Pennsylvania. He has been featured on many platforms such as C-SPAN, NPR, and various local news outlets.